Compatibility of prostate adenoma and alcohol.

Prostate adenoma is often found in older men, it causes the appearance of negative symptoms of the lower urinary tract. The prevalence of adenoma increases after 40 years.

Genetics, diet and lifestyle play a significant role in the severity of the symptoms of the disease. Prostate adenoma goes hand in hand with metabolic syndrome and erectile dysfunction. The underlying cause of the disease may be an inflammatory process.

Lifestyle changes, including physical activity and diet, are fundamental in the fight against the disease. Prostate adenoma and alcohol consumption are compatible if the recommended doses of alcohol are observed.

Is it permissible to drink alcohol in the treatment of prostate adenoma?

A meta-analysis of 19 published studies involving more than 120,000 men demonstrated a link between alcohol consumption and the development of prostate adenoma

Researchers have found that moderate alcohol consumption in prostatitis and prostate adenoma reduces the severity of negative symptoms by 35%. At the same time, there were complaints about the functioning of the bladder and urethra.

A meta-analysis determined how alcohol affects prostate adenoma. The consumption of alcoholic beverages at the level of 30-50 g per day affects the balance of androgens, reducing the concentration of testosterone in the plasma. This leads to a decrease in the severity of symptoms of prostate adenoma. An increase in the daily dose of alcohol does not improve the prognosis and course of the disease.

Interaction of alcohol and drugs for the treatment of prostate adenoma

Alcohol in the presence of prostate adenoma may interact with medications prescribed by a urologist, reduce the bioavailability of the drug, its concentration in the blood or cause side effects.

For the treatment of prostate hyperplasia, 3 groups of medications are used:

The combination of alcohol with taking alpha blockers, such as tamsulosin and silodosin, may increase the risk of orthostatic hypotension. Patients have a very low blood pressure, there are cases of fainting when getting up.

Patients will complain of headache, dizziness, loss of consciousness, and the doctor will establish a slowing of the pulse, heart rate. The described effects may appear at the start of therapy, when increasing the dose or resuming treatment after a forced pause. The described situations prohibit the intake of any alcohol.

Tadalafil, a phosphodiesterase-5 inhibitor used in erectile dysfunction, is also approved for the treatment of prostate adenoma, in combination with alcohol can have an additive effect to lower blood pressure, more details about tadalafil and other drugs can be read here.

These effects may be more noticeable at the initial stage of therapy. Alcohol consumption should be avoided during treatment with tadalafil.

5-alpha-reductase inhibitors, such as finasteride or dutasteride, block the conversion of testosterone to dihydrotestosterone. The latter is involved in the development of adenoma. According to the instructions, these drugs do not interact with alcohol.

Patients taking medications for the treatment of adenoma should consult with their doctor regarding the possibility of drinking alcoholic beverages, determining a safe daily dose.

Dozens of studies have examined the effects of wine consumption and, in particular, its component resveratrol, and the cardiovascular and reproductive systems. Most of the studies are positive with moderate consumption of this alcoholic beverage. Red wine contains more resveratrol, about 0.2 - 5.8 mg/l, than white.

In California, a study was conducted that included 84,000 healthy male volunteers on the effect of a variety of alcoholic beverages and their combined use on the risk of prostate cancer. It was found that with moderate consumption, wine is not associated with the risk of this disease.

Doctors recommend not to exceed the daily dose of alcohol above two units. For wine, this is about 200 ml.

In a study conducted by the Harvard School, data on alcohol consumption and its impact on prostate health were evaluated. It has been found that the intake of strong alcoholic beverages significantly increases the risk of prostate cancer. Data obtained between 1988 and 1993 prove that men who drink are 61-67% more at risk of developing prostate cancer than non-drinkers.

A later California study found that there was no connection between strong alcohol and prostate cancer, provided that no more than 50 g of such alcohol was consumed per day.

Having rather contradictory data regarding 40-degree alcohol, doctors recommend that when choosing between strong alcohol and wine, lean in favor of the latter.

In December 2016, a study conducted by oncourologist Pierre Karakevich was published with the participation of about 4,000 men with an average age of 64 years. In it, the author shares the observation that many men suffering from late-stage prostate cancer consumed beer in large doses.

Karakevich and his co-authors use a variable called the years of beer consumption, that is, the average amount consumed per day multiplied by the number of years of consumption. The risk of prostate cancer does not increase in men who do not exceed the permitted dose of beer. It is 500 ml per day.

What can and cannot be done with prostate adenoma?

It is possible to consume alcohol in moderation, except in cases of direct contraindications specified in the instructions for the drug.

The concept of alcohol unit is used to calculate the safe amount. This is due to the fact that different types of alcoholic beverages contain different amounts of ethanol.

One unit for different types of alcoholic beverages:

It is important to understand that absolutely safe alcohol does not exist, because the use is addictive.

To study the relationship between the use of alcoholic beverages, the severity of symptoms of prostatic hyperplasia, profiles of reproductive hormones, a large-scale study was conducted in China. More than 4.5 thousand men took part in it.

A cross-sectional study found that a lower value of free prostate specific antigen (PSA) and the ratio of free PSA to total is observed in men who regularly consume alcohol. The subjects who drank in the past also had a lower level of free PSA than non-drinkers in general.

This cancer marker is organ-specific, that is, an increase in its concentration in the blood indicates prostate disease. 30% of men with elevated PSA were diagnosed with prostate cancer during a subsequent diagnostic biopsy. An increase in PSA levels also indicates the presence of benign prostatic hyperplasia.

The level of the first three substances decreases, and estradiol increases.

The study confirmed that alcohol in reasonable doses does not have an obvious effect on the symptoms of adenoma.

A diet that improves prostate function

A diet rich in certain vitamins and minerals preserves prostate health, reduces the risk of adenoma.

Products that improve the condition of the prostate:

Overweight leads to the development of metabolic syndrome, which is a risk factor for the development of benign prostatic hyperplasia. A proper balanced diet will help not only to reduce weight, but also the risk of developing prostate disease.

Diagnosis of prostatic hyperplasia begins with collecting anamnesis and interviewing the patient using a special questionnaire, including seven questions. The questionnaire, or the International Prostate Symptoms Assessment Scale (I-PSS), provides a subjective assessment of a man's health status. 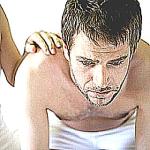 To obtain an objective picture, the following are used:

Palpation of the prostate gland during a finger examination of the rectum allows you to determine the size, density, symmetry of the gland and its soreness when pressed.

View all posts by: gaxroseanne